A Super Bug for the Invasive Prickly Pear in Laikipia 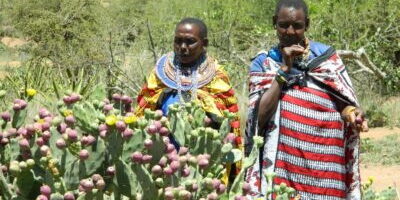 The prickly pear, or Opuntia, is a plant surrounded by Mexican mystery and legend and has been an iconic ingredient in various South American dishes and ceremonies for centuries. Its reputation is one filled with health and prosperity.

Brought into Kenya’s Northern Laikipia territory over 40 years ago to be used as a live fence on ranches, the prickly pear was functional in keeping out trespassers

Today the prickly pear is demonstrating its natural aggressiveness and occupies vast stretches of land, displacing pasture and challenging indigenous plants. The fruits produced by the cacti attract livestock and humans alike with their sweet flesh and this is part of the reason why the plant has spread like wildfire in such a short period of time.

When local communities in Northern Laikipia, many of whom are pastoralists, heard that there was a super bug that would finally get rid of the plant that has been a scourge for decades, there was much to celebrate.

The Cochineal – aka super bug – originates from South America and Mexico and is known mostly for supplying the fashion designers “dream dye” – carmine. The stunning red colour which is harvested from the Cochineal after feeding on the sap from prickly pear leaves and fruits, was also used in pre-Hispanic rituals, and is still widely used in Central America.

When introduced to an area, the super bug – which is a host specific parasite – heavily infests the prickly pear leaves, destroying the plant gradually until it finally dies. The female inserts a tube into the pad to obtain nourishment, and secretes a white, web-like, wax-based material over the area for camouflage and to prevent quick desiccation.

In April 2015, John Weller from Ol Jogi Conservancy, together with Dr. Arne Witt from the Centre For Agriculture And Biosciences (CABI); Prof. Geoffrey Wahungu, Director General of NEMA, local government and community group representatives officially launched the first public release of the Cochneal after 2 years of intense trials.

When addressing those in attendance during the 24th April function, Dr. Arne Witt from CABI emphasised the important role those local communities will play in the success of the project, encouraging those in attendance to communicate any changes as a result of the introduction of the bug in their respective areas.

Invasive species is an international problem, and quite rightly so, as it is estimated that the damage caused worldwide by these species now stands at a warping USD$1 trillion.

LWF plans to include invasive species management and eradication as part of its future rangelands management programming in Laikipia.