The Opuntia Cactus Meets Its Match 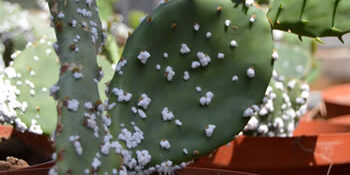 Opuntia species have been present in Laikipia for over 50 years. These species were initially introduced for ornamental and live fencing purposes. However, over the past 15 years, some of these species have spread and become aggressively invasive, covering hundreds of acres of land.

This spread has included invasion of conservation areas, rangelands and cultivation areas where it is responsible for a range of negative impacts that have not been systematically quantified.

To control the plant species, the Laikipia County government mobilized stakeholders to begin addressing this menace.

The County Government brought these key stakeholders together following their previous involvement in control and eradication of Opuntia. These stakeholders were urged to develop a roadmap for tackling the menace.

Suggestions were tabled on how the species can be controlled:

Following previous experiences by different stakeholders, the forum agreed that the nine stakeholders organizations present and chairperson of group ranches in Naibunga will form the steering committee to oversee the next steps and future engagement of the forum, including fundraising. The steering committee will consist of a “mechanical sub-committee” that will oversee the manual removal of Opuntia and “biological sub-committee” that will oversee biological control of the species.

The Steering Committee meeting is expected to hold its first meeting in June.

The meeting was supported financially by the Laikipia Wildlife Forum, Groots Kenya, Mpala Research Centre and the Northern Rangerlands Trust.