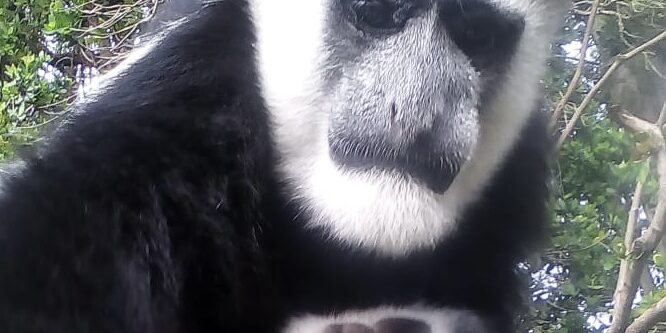 Camille Wekesa and Caren Tankard both moved to Nanyuki in 2014 and became friends and neighbours as they each began reforestation projects on their plots along the Ontulili River, a few kilometres outside of Nanyuki, off the Meru road to Timau.

The regeneration of their individual plots saw an increase in the Colobus and Sykes monkey populations. Certain families now reside at each of their plots where they feel safe, protected and have enough canopy for food and easy movement.

Camille and Caren have also planted over 7000 trees between then with indigenous species such as albizia, meru oak, olive, fig-trees, croton, podo, cedar, the cabbage tree and many others.

Camille has seen three Colobus born into the family that lives on her plot in the last 12 months (2020). She has also recently sighted a family with five babies under the age of 1-year-old on the other side of the Ontulili River, on Turaco Farm, with at least six adults in same the group. Caren has a family of seven Colobus residing at her plot.

They both hear other Colobus families calling along the Ontulili River and see Sykes monkeys frequently.

Both women, with the support of neighbours, well-wishers, and the Forum have initiated the Ontuili Primates Protection – an organization dedicated to the long-term protection and conservation of the sub-catcment and riverine forest of the Ontulili Forest.

Next steps for the establishment of the OPP include:

Some of the Activities, Projects and Actions they are working on include:

The issues of deforestation and environmental abuse remain very real threats. Local farmers have cut back the indigenous trees right up to the riverbank and planted maize for food and napier grass for cow feed on the 15 meters demanded by law as riparian reserve (as stated in law).

Conflicts with the primates occur when the monkeys target food crops (particularly maize), and because of loss of habitat, increasingly depend on farmers’ food.

A quick count of the monkeys was sponsored by the Mt Kenya Trust in 2014. Since then, numbers of monkeys have increased because individual landowners have made conscious decisions to plant and/or maintain habitat that supports the resident primates.

The potential for primate tourism as an income-generating tool to support these conservation efforts would also appear to be great if there is an increase in primates.

OPP will set up a Facebook and Instagram page and a blog story on the weekly lives of the primates as well as getting binoculars and other simple equipment to assist in keeping track of the primates. To date, these efforts are all led by a strong group of women with a commitment to the future natural integrity of their surroundings.

The Forum supports the efforts of OPP and looks forward to adding their growing effort to the group of conservation partners it supports in the greater Laikipia landscape.