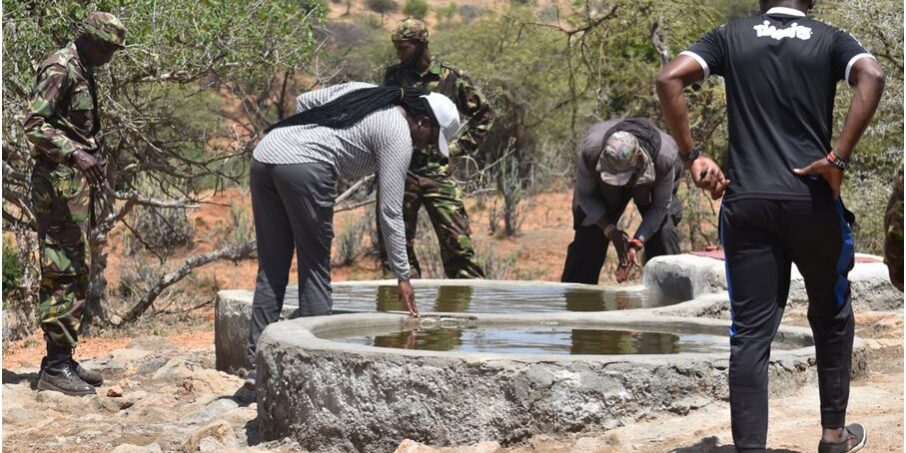 Human-Elephant Conflict is a recurring threat in Laikipia North with severe consequences to both. According to the 2020 MIKE (Monitoring of the Illegal Killing of Elephants) report forIn Laikipia and Samburu, 153 cases of elephant mortality were reported. The highest percentage was from natural deaths. Human-Elephant conflicts accounted for 26.14% of all elephant deaths. At least five people have died as part ofthese conflicts.

These conflicts are mainly resource-based i.e. Wildlife and Livestock fighting for water resources. In the past un-separated access points for water have increased the occurrence of Human-Elephant conflicts.Various projects were put in place by the Wildlife Conservation Society/ Disney Conservation Fund to mitigate the resource conflict and consequently human-elephant conflict. These include.

The Protection and Harnessing of the Loontana Spring in Sieku the spring will serve Lekurruki and Il Ngwesi group ranches as well as elephants and other wildlife. The Spring is close to communities and thus community members will have reduced trips to and from the spring which consequently reduces human-elephant conflict. This project will not only reduce Human-Elephant Conflict but also enhance Water Security.

The cameras help track wildlife using the water hole at night and during the day.  It has been evident that elephants are the most frequent wildlife visitors at these newly protected watering holes.

The fencing project (electric fence) has also been of great importance. The Arjiju Community members have relied on small scale agriculture; and frequent crop raids from elephants were a threat to their work. Fencing has reduced the elephant conflicts and has also meant that communities have been able to reap a meaningful harvest.

After conclusion of these projects, different committees, in partnership with the Ilmamusi CFA will oversee the running of the projects. For example. The Loragai Spring Committee has been trained on the different components of community water project management.  These trainings are geared towards strengthening their governance and ensuring they can be able to operate and run the project smoothly.

Community members make monthly contributions towards the management of the spring. Money generated and collected will be used in the maintenance of the water project. Local communities will be tasked with responsibility for the projects and ensure that even in the coming year, the projects will still be running effectively.

The implementation of this project has been supported by