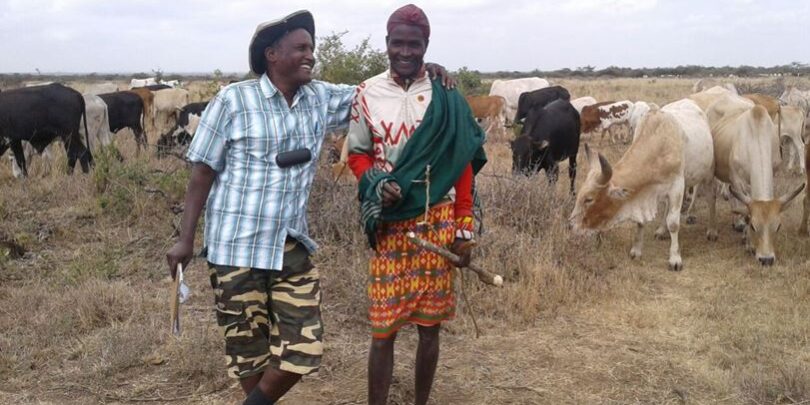 Mathew Chana(left) shares a light moment with a herder in Laikipia County.

Mathew Chana passed away on April 24 from complications arising from Covid 19.  Northern Kenya, and Laikipia in particular, lost a guiding light in rangelands, livestock and wildlife.

Whisperer is a term used to describe people with a special connection with nature. Often, the term is applied to people with special communication skills to an animal or a species of animal. Matthew Chana was a rangelands whisperer. He could connect with just about anyone, and he always left you feeling better for the engagement.

Matthew was a Kenyan first, a pastoralist second, a Rendille by birth, and a leader by virtue of his heart, his diplomacy and engaging personality. He was responsible for all sorts of environmental achievements, including the restoration of forest, springs and wildlife in his home area, Arsim, between Mt. Poi and the Ndoto Mountains, in Marsabit County.

A camel keeper by choice, Matthew was the true leader of the Holistic Management movement launched with the Savory Institute in Laikipia starting around 2007.  Most of his work was conducted under the title of Rangelands and Outreach Team Leader on the community lands around Lewa , Ole Naishu, and Borana conservancies. More than a project, Matthew approached rangelands restoration as a way of life, and led people in productive actions to restore grasslands using Savory’s techniques, alongside strong pastoralist knowledge and community values.

As a recipient of the Anthony King Conservation Leaders Trust, and in concert with the Forum, Matthew continued to work on the build-up to the challenges of the 2018 drought and incursions into Laikipia. He led an LWF field team dedicated to an early warning system on pastoralist problems, incursions and relations with conservancies, helping to alert landowners to the onset of incursions and working to find solutions to reduce the conflicts. He also led the work to provide drought management relief support by LWF, Laikipia County and NDMA to Laikipia Group Ranches.

Please join us in holding Matthew and his family in prayer and as an example of great rangeland citizenry.