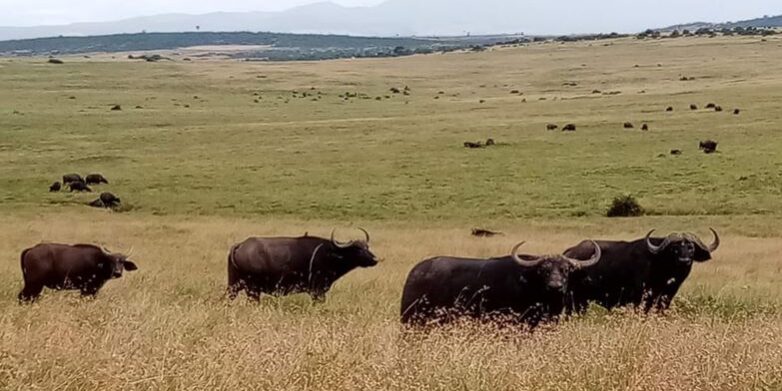 The 2021 National Wildlife Census Report was officially handed over to the President of Kenya at State House by the Tourism CS Najib Balala. This was the first National Wildlife census to be fully funded by the Government, and conducted by Kenyan experts.

The report revealed that Kenya has a total of 36,280 savanna elephants, becoming the fourth largest population in the world after Zimbabwe, Botswana, and Tanzania. The census also indicated that Kenya is home to 1,739 rhinos, among them two northern white rhino species, 897 black rhinos, and 840 southern white rhinos.

Kenya wildlife conservation agencies were applauded by the President during this ceremony. With special acknowledgement to the Ministry of Tourism and Wildlife, the Kenya Wildlife Service, and community led conservation entities.

The President noted that it was through the partnership and collaborative approach amongst all agencies and conservancies that anti-poaching efforts had become a success. The agencies were challenged at the same time to continue finding new, innovative approaches for the sustainable management of Kenya’s rich wildlife heritage.

In his remarks the President stated that wildlife is an important national heritage that needs to be protected and conserved for posterity and for the benefit of all Kenyans.

The President also assured Kenyans that the government continues to seek sustainable solutions to the challenge on human, wildlife conflict and urged sector stakeholders to continue educating host

Many Laikipia residents believe that the smaller wildlife numbers are not accurately represented in the new Census. Information is flowing to us that the kongoni (Llewelyn’s hartebeest are seriously undercounted, as are klipspringers, kudu, and other rangeland species. Patas monkeys are disappearing from our landscape, and warthog numbers remain unknown.

Much of this undercounting stems from the aerial techniques used and the size of the rangeland mammals or their similarity to other species. We’ve yet to learn of additional reports that add to our understanding of wildlife in the landscape (more to expect on lions and cheetahs), but we can still say that Laikipia is one of the best conserved wildlife landscapes in the country. We look for more accurate numbers that help to inform management, fencing, conflict prevention, and our landscape ecology.